B3, an essay by Martyn Jolly 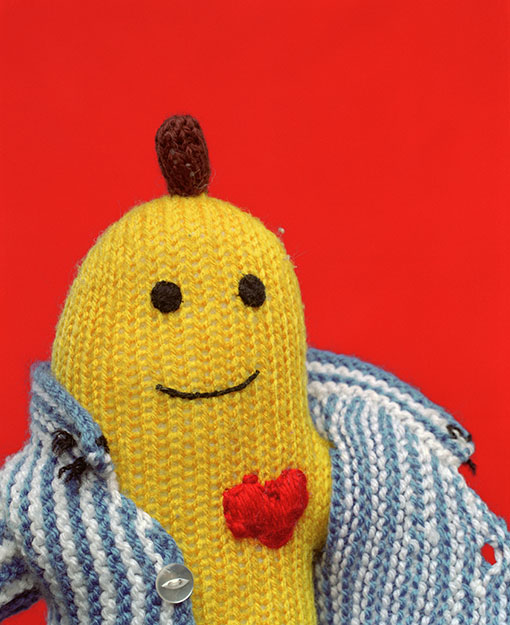 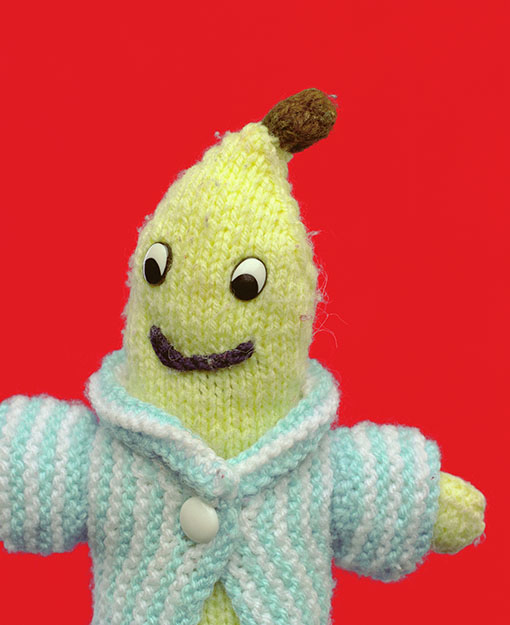 Absolutely everybody in Australia, and many other people around the world, would recognise the Bananas in Pyjamas instantly. To Australian children, B1 and B2, as the characters call each other, come from a phase they all went through in pre-school, when they adored the lovable Bananas in their white and blue striped pyjamas as they rollicked across their TV screens getting themselves into, and out of, muddles with a delightfully light sense of humour. To Australian adults they are probably the least annoying of all children’s TV characters. With their slightly camp relationship to each, and their absolutely unique shape — not a cuddly teddy bear or a twee fairy but a two metre tall banana — the identical odd couple of B1 and B2 are ripe for affectionate parody.

The Bananas in Pyjamas are part of the stable of children’s TV characters shown by the Australian Broadcasting Corporation. A vast range of Banana merchandise, from plush toys to bed sheets to backpacks, is available under licence for parents and grandparents to buy for their children’s presents. The ABC guards its copyright as jealously as any other corporation, but at the same time ordinary Australian people feel a sense of ownership and participation in the ABC that they don’t feel for other trans-national media organisations. Therefore, patterns from which you can knit your own Banana have been published in popular magazines such as the The Australian Women’s Weekly and in home-craft magazines. And vernacular, home knitted Bananas regularly appear in children’s bedrooms, alongside the officially merchandised Banana clones which are produced in their thousands by factories in China.

You can’t just walk in and buy these knitted Bananas from toyshops or ABC franchises. You have to be attending a school fete or Saturday morning market, where you will stumble across them lying in anticipation on a lady’s trestle table, newly knitted in fresh wool and nestled amongst the piles of all of her other knitting — baby’s clothes and coat-hanger covers and beanies. Or you have to be browsing through a garage sale or Op Shop, where you might find one, with its wool smudged and fluffed after a lifetime’s use, amongst all of the other bruised and battered toys a child has grown out of, which they are now offering up for hopeful sale.

For several years David Wills has been rescuing Bananas from the lonely isolation of such places and assembling them into a collection. These ‘other’ Bananas aren’t stamped from the same factory template as the official plush toys, rather a different pair of hands has knitted each one from the same pattern. Each knitter has been more or less skillful in her stitching, each has chosen wool at a higher or lower level of virulence in the Bananas’ signature colours of yellow, blue and white, and each has stuffed the Bananas with more or less wadding, distending the stitches to different degrees in different shapes. Most importantly, each has applied in her own unique way those vital details: the stitching of the mouth and eyes and stalk — that last touch that finally animates the previously inert Banana with personality and life.

David Wills has taken each of these alternate Bananas — aberrant offshoots from an ideal root-stock — and made a series of respectful head and shoulder portraits of them. Toys and dolls have long been a favourite subject for photographers. But these images aren’t just microscopic still-lives of toys, or table-top tableaus of dolls and figurines enacting some socially parodic scenario, they are fully constituted portraits. Each Banana squarely faces the camera, and is allowed to present his own stitched-on face and his own acquired personality to the viewer. This is not a rogues gallery of mugshots, photographed against a red background and framed in gold, the Bananas present an array of faces to be admired, like oil paintings in an ancestral hall, executive portraits in a boardroom, or graduand portraits in a yearbook. Bravely posing for their portraits in front of Wills’ camera, these knitted toys have none of the abjection of Mike Kelley’s hand knitted toys. They are not the pathetic tragic residue of an excess of cloying love, rather the individuality of that love, which is revealed by the careful repetition of Wills’s respectful portraiture, seems to have granted them an uncanny vitality, independence and autonomy.

Looking along the rows of faces the viewer can compare and contrast the ways in which the identical DNA of the original Banana knitting pattern has been nurtured into unique individuality. In general these Bananas, like their original models, exude generous bonhomie, they open their arms out to us and give us a great big goofy smile. Intelligence was never the original Bananas’ strong point. Part of B1 and B2’s charm, apart from the fact that they are only differentiated by the small ‘B1’ and ‘B2’ embroidered on their collars, is that as they are getting themselves into yet another muddle they are the are always the last to realize what their pre-school audience already, delightedly, knows. Most of the faces stitched onto the other knitted Banana have a similar naïve openness. Some even seem to open their pyjama jackets to us, showing us their generous woolly hearts like a cuddly Jesus. But not all of them. Once the core Banana DNA has bolted the stable of industrial replication it can genetically mutate into all kinds of new creatures. Some of the knitted Bananas seem to have changed gender, growing a well-padded maternal bosom between their outstretched arms. Others seemed to have even crossed over to the other side, with the blue stripes of their pyjamas darkening to black, and their wide grins being pinched into a Mephistophelian leer.

What allows these contrasts to take place, of course, is not only the unique love and care with which they were originally knitted, but the rigorous system of portraiture that allows us to compare them. Evolution has trained us to interpret faces. We have to read the language of the face, no matter how crudely the eyes and mouth are delineated, just as we have to compare expressions when we see them presented in a clean grid, where the nuances of expressive inflection are amplified by their modulation of a serial pattern. In David Wills’ care these Bananas, who are mustered together after being scattered to the far corners of Australian vernacular culture, are now no longer alone, but reunited with their siblings. This family of ‘B3s’ are found to be just like each other on the one hand, but also utterly strange to each other on the other. And in that, they are exactly like us.